I’ll admit to being nervous.

My image of Detroit was locked into 1967 and the riot, or trips to Florida when we couldn’t get on I-75 fast enough. Then the city was a shadow of its heyday, when it was known as the Paris of the West. But now it seems Motown’s dark days are in the rear-view mirror, with boom and bloom poised to replace doom and gloom. The change is sparked by a vibrant arts scene, urban gardening, food, craft beer, and major league sports. 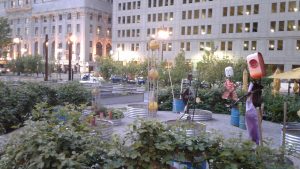 Several urban gardens have been established
on vacant lots throughout downtown Detroit.

Eating your way through Detroit starts downtown on Lafayette Boulevard at side-by-side hotdog counters. Lafayette Coney Island and the original American Coney Island (it’s now bigger in Las Vegas than Detroit) were started by Greek immigrant brothers nearly a century ago. As Kim Rusinow, my guide aboard the Show Me Detroit Tours bus, pointed out, Detroiters are fiercely loyal to one hotdog or the other. “Either you are a Lafayette person or an American,” she said.

Perhaps inspired by the sprawling Eastern Market and the numerous urban community gardens dotting formerly vacant lots amid art deco downtown skyscrapers and residential neighbourhoods, Detroit’s food scene goes way beyond hotdogs. The Eastern Market, dating to 1841, is the oldest indoor-outdoor market in the United States. It’s open daily except Sunday, but Saturdays are when the six-block market between Gratiot and Mack avenues comes alive.

Among the restaurants in the market district are La Rondinella and Supino Pizza, both owned by chef Dave Mancini. The pizzeria was inspired by a trip to Supino, Italy, and a family reunion. La Rondinella, which opened in 2016, features his personal take on Italian food with the focus on no particular region.

“They’re things I’ve encountered in various places,” he said. “They’re a lot of things I really like. The basic inspiration for the menu is simple food that’s Italian in spirit or that’s simple but done really well. This is food you might encounter in a working class household in Italy but, I hope, done memorably.” It’s also affordable dining, with a meal and a beer or glass of wine for under $20. 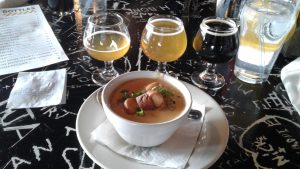 A flight of beer and cheese ale soup made with garden fresh carrots, celery and onion is the start of a delicious lunch at HopCat in Detroit.

A 10-minute drive from the Eastern Market, in Midtown at the corner of 2nd Avenue and Selden, is a shining example of a fine dining restaurant rebooting a neighbourhood. Selden Standard opened in 2014 and a year later was named Restaurant of the Year by the Detroit Free Press. It’s located two blocks away from the Fisher Music Centre (home of the Detroit Symphony), and close to Wayne State University. The restaurant property was derelict when bought by chef Andy Hollyday and partner Evan Hansen. Hollyday describes his food as seasonal and simple, with wines from small producers. “Living here, I felt like I was part of some kind of renaissance of the city and food,” said Hollyday. His was one of more than 100 restaurants to spring up in 2014 and 2015.

My favourite cluster of Detroit eateries is in the West Canfield neighbourhood. There, on my first day in Detroit, I was delighted to nosh at the eclectic Traffic Jam and Snug, which in 1992 became Michigan’s first brewpub. It is noted for the Chocolate Amber Ale and Burton School of IPA (brewed for those who claim they don’t like IPAs). In addition to an ever-changing roster of beers, Traffic Jam and Snug makes its own bread and cheese. Produce is purchased locally from Detroit’s Earthworks, an urban farm started by a Capuchin friar, and the menu caters to both omnivores and vegetarians.

Across the street is Motor City Brewing Works and Winery, and across the corner at Woodward Avenue and East Canfield is the cheeky HopCat, famous for cracked fries and a revolving selection of 30 craft beers.

When exploring the Motor City two wheels, not four, is the best way to get up close and personal. There are a couple of great cycling options. One is a beer tour.Owner and tour leader Steve Johnson is also a recently published beer guide author. More broad-based is Wheelhouse Detroit, located on the riverfront along Atwater Street. Wheelhouse’s Kelli Kavanaugh is one of Detroit’s biggest boosters of urban renewal and fitness.

The Heidelberg Project has transformed a neighbourhood with its use of urban cast-off items and houses as art, including a polka-dot house.

Both cycling tours led me through the Dequindre Cut, an art-dotted reclaimed railway line which once served industries along the Detroit River.

My bicycle tour with Wheelhouse, using a mix of dedicated trails and marked bike lanes on city streets, had me peddling to such free attractions as Belle Isle and the Heidelberg Project, an artistically arranged street of urban cast-off stuff that brought fame and controversy to its neighbourhood.

Art is everywhere in Detroit, and not just in such obvious places as the world-renowned Detroit Institute of Arts in Midtown or the stunning graffiti of Corktown shown off by the Show Me Detroit bus tour.

Downtown the Library Street Collective Gallery showcases contemporary artists who developed their skills with art in public places. Its back door opens to The Belt, an alleyway lined with murals by nationally famous artists, street furniture and soon, food carts.

Across the alleyway is the Z Garage, a 10-storey parking facility filled with murals by 27 different artists from the U.S., United Kingdom, Australia, and Greece. The murals were commissioned by real estate developer Dan Gilbert, one of the major investors in Detroit’s resurgence.

Glass artist Albert Young of Michigan Hot Glass creates pieces which look more like pottery than glass in his studio at the Russell Industrial Center. 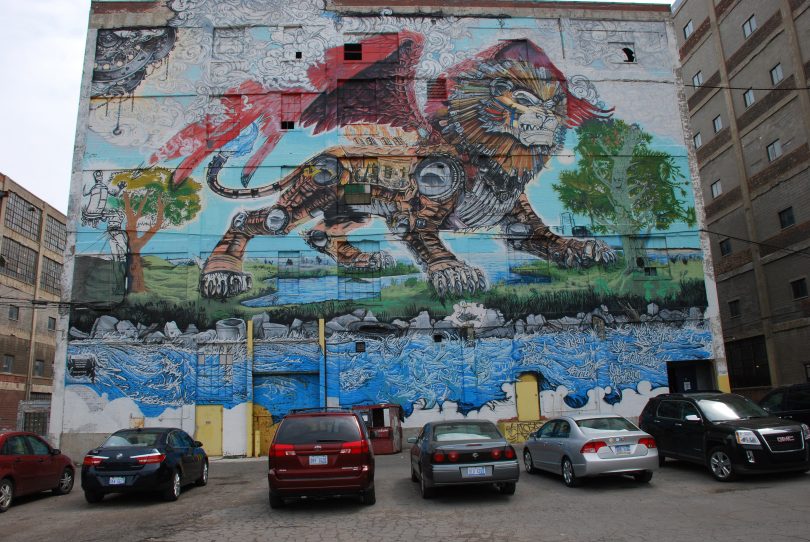 A giant mural dominates the Russell Industrial Center, a former auto body factory in the midst of being repurposed as an arts and business complex. 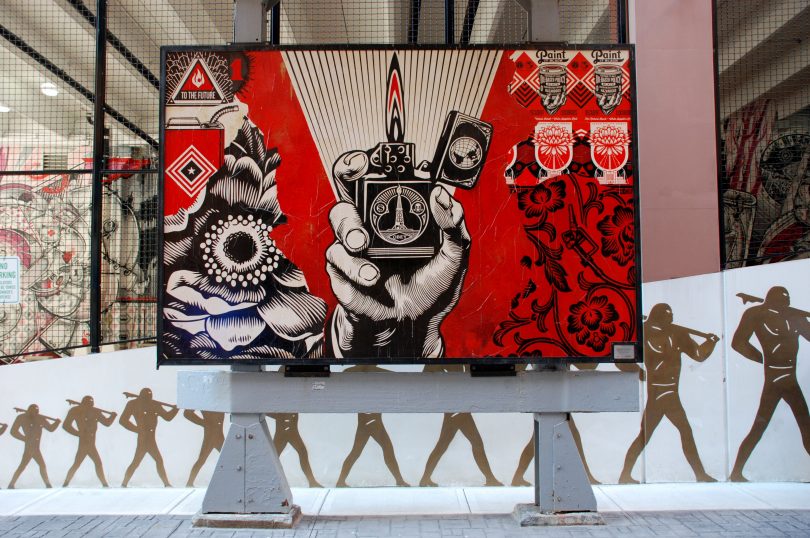 Smoke Em While You Got Em, a mural by Shepard Fairey, is one of several in The Belt

Near the Eastern Market, in a former brewery, is the labyrinth-like Red Bull House of Art and at 1600 Clay Street, the Russell Industrial Centre is a seven-building complex being developed as an artists’ colony. Built between 1915 and 1925 originally to produce auto bodies, the Russell Industrial Centre is now becoming home to mixed use businesses highlighted by dozens of artists’ studios including one occupied by Albert Young of Michigan Hot Glass, a noted glass artist whose work ranges in size from the intimate to the monumental.

While food, fitness and art are all playing an important role in making Detroit hip, it’s the holy trinity of major league sports which may have the greatest impact. The Major League Baseball Detroit Tigers and NFL Lions already have adjourning stadiums. By September 2017 the Detroit Red Wings will join them with a new state-of-the-art arena in the same entertainment-filled neighbourhood.

My exploration of Detroit ended surrounded by millennials at Punch Bowl Social, a 10-minute walk from Comerica Park. Part restaurant, park social club complete with a bowling alley and retro video games, Punch Bowl Social might be described as a next wave Hard Rock Cafe. It has locations in a Denver, Austin, and Portland, Oregon, each of which has large numbers of millennial residents. Its owners see Detroit as the next hot spot.

Who am I to disagree?

Wayne Newton is a freelance journalist. He is eatdrink’s beer columnist.

Wayne Newton is a freelance journalist in London who enjoys writing about beer and travel.