After years of travelling concessions and scouting back roads we have begun to notice a renewed prevalence of hand-painted signs and newly erected farmgate stalls at the end of long laneways throughout Huron County’s countryside. The modest chalkboards and hand-crafted wooden signs announce: free run eggs, horseradish, honey, maple syrup, sauerkraut, rhubarb, strawberries, seasonal vegetables and fruit, fresh-cut bouquets, baking and “No Sunday Sales.” Often there’s no one there to receive you, just a wooden box or a locked drawer into which to drop your money. It is called the honour system. 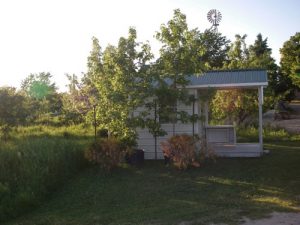 At six-thirty in the morning we have already travelled two hours from the Bruce Peninsula. We are returning to the city when we pull into the dirt laneway off the beaten track. The farmgate is more of a purpose built out-building flanking a large greenhouse and the whitewashed homestead for the family of ten. Sarah, an Old Order Mennonite, greets us wearing a solid-coloured dress of heavy broadcloth. A matching extra-long apron covers the dress. Her long hair is coiled into a tight bun, and her head is covered with a plain white cap tied under her neck. She emanates industry, simplicity and modesty.

Discussing the small packets of seasonal saffron she has for sale, I offer to lend her The Essential Saffron Companion on a return visit. “I have no time to read a book,” says Sarah, matter-of-factly. After several attempts to interrogate her about the plants her “safferon” is collected from, it still remains a mystery. 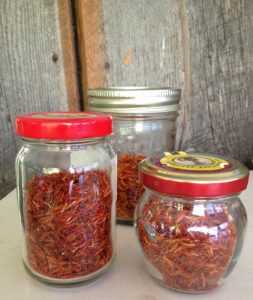 Cultivated as a kitchen-garden staple for generations, saffron’s role has been defined in traditional, regional poultry and noodle dishes in Pennsylvania’s Amish and Mennonite kitchens. Sweet and warm with an intense aromatic flavour, it confers earthiness and is known for its sunny appearance. (Saffron filaments need to be activated in hot liquid or stock before use. Many cooks are oblivious to this and subsequently saffron’s virtues continue to escape them.) Despite continuing speculation, Sarah firmly rejects the spring blooming, purple flowered crocus as a possible candidate, simply referring to it as the “safferon” plant.

I am left to wonder if these delicate aromatic threads come from field marigolds, or calendula, which are known for both their culinary and medicinal uses. Both the calendula and the safflower are often referred to as “poor man’s saffron.” Sarah scoffs at the idea of harvesting saffron from fields of wildflowers, especially now, during planting season. She tells us that her mother carefully removes the vivid crimson stigmas from each blossom individually before drying them for weeks in a warm, dry place.

Hooked by the quality and the familiar taste of saffron, the thought of cultivating it locally and its many culinary applications makes my head reel. In time, I have learned that the potency of saffron is indeed a product of its terroir and how it is treated after it is harvested. In the past, I have known saffron to impart a floral taste, honey sweetness or toasted, nutty, and pungent flavours.

In conversation, Sarah doesn’t give voice to her opinions and her observations are to-the-point and instructive local Mennonite history lessons. With her husband nodding sober agreement, she speaks plainly about how the Old Order continues to use horses and buggies for transportation and horse drawn implements for field and farm work. She talks of the growing community whose population has doubled since they migrated to Huron County in the late 1970s. Interestingly, further to the south, Perth County has the largest and oldest Old Order Amish community in Canada and the only Old Order community that originated in Canada.

Wholesome, modest offerings that are meant to stick to your ribs and sustain your soul have been prepared by Mennonite, Amish and Hutterite cooks for centuries. The food has its own gastronomical connotations like “tasty,” “lip-smackin’,” and “food that really schmecks.”

Old Order Mennonites, Amish and Hutterites are spiritual counterparts that share a past that dates back to the Protestant Reformation in Europe, where they embraced adult baptism and pacifism. The relative isolation and self-sufficiency within closed communities, combined with their conviction that farming is a way of life, produced unique socio-religious cultures. They are all known for the high quality of their seasonal farmgate and farmers’ market offerings.

In the recently published and imminently instructive Secrets of a Hutterite Kitchen, Winnipeg author Mary-Ann Kirby gives a voice to contemporary Hutterite life that remains rooted in cherished spiritual convictions and a closed community of Old World traditions. More than 40,000 Hutterites live on 400 colonies throughout the United States and in Canada’s Prairie provinces. The book is the compelling narrative of a woman who was raised in the Hutterite community, was torn from it, then returned to it with focused objectivity and genuine appreciation for the culture and cuisine. Kirkby has compiled a collection of recipes in her book, many adapted by her mother, with a directness of voice that recalls Hutterite oral tradition.

Here is a partial excerpt for the Hutterite recipe for 50 lbs of Sauer Kraut [sic]: Fill barrels with cut-up cabbage and salt and sugar. Jump in barrel. Be sure you are wearing new rubber boots. Stomp it down until it is covered in its own juices. (Two people per barrel.) Make Sauer Kraut when there is a new moon and it won’t get moldy. 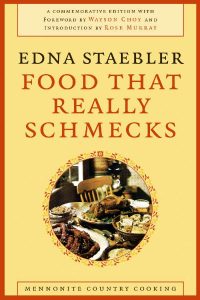 No discussion about this style of cooking would be complete without paying homage to Edna Staebler’s popular treatise Food That Really Schmecks: Mennonite Country Cooking as Prepared by My Mennonite Friend Bevvy Martin, My Mother and Other Fine Cooks. The book exalted the cuisine and lifestyle of Old Order Mennonites by documenting over 700 recipes as practiced in the Kitchener-Waterloo County district. Initially published in 1968, selling hundreds of thousands of copies it became a classic in the canon of Mennonite cooking along with its companion, More Food That Really Schmecks.

Staebler, an award-winning literary journalist and author, raised Ontario’s Waterloo region’s profile as a distinctive culinary destination. Food That Really Schmecks evokes an enduring code of conduct and tradition that can still be found at farmers’ markets and the farmgate.

Until I experienced the growing seasons and agricultural products at the Old Order Amish and Mennonite farm gates, and had conversations that developed into meaningful acquaintanceships with the farmers and their families, I had not realized the inherent social and economic value of the farm gate. Buying from the farm gate enables people to develop connections to a farm and the innate tenets of stewardship of the land and its natural resources. It can make a big difference in a farm family’s life. Never mind your own.

Last year, the Township of Huron-Kinloss produced an informative brochure celebrating rural life, called Secrets of the Back 40: A Farm Gate Experience. Descriptions of each farmgate, including what they sell, hours of operation, method of payment accepted, etc., are provided in the brochure along with a map showing their location. www.huronkinloss.com/public_docs/documents/farmgate-brochure-final-8.5x17LR.pdf