Hugh Fearnley-Whittingstall is a British chef and television personality, writer, farmer, educator, and campaigner for sustainably produced food. In the late 90’s he settled at River Cottage and began a journey of ecology, economy and sustainability. Through the course of seven cookbooks and a handful of television shows, he’s farmed, fished and foraged for his dinner to show the rest of us how it’s done.

Though he’s not a vegetarian, he advocates the consumption of less meat and fish. “Just ask yourself if you, or anyone you know, might be in danger of eating too many vegetables,” he quips in his latest book, River Cottage Veg. Referring to himself as a “notorious carnivore”, Fearnley-Whittingstall has long campaigned for the ethical and sustainable treatment of animals raised or caught for food. He is trying to change the way we treat our food animals, eliminating factory farms and fishing quotas that needlessly waste catch.
In this book and an accompanying television program, he challenges himself to a whole summer without eating meat or fish. Rather than finding ways to replace meat he sets out to make vegetables shine. This is an all out embrace of the fact that delicious food can be made without the usual slab of meat dominating the plate. Without the meaty spotlight, meals are more likely to consist of small, complimentary dishes similar to tapas.
River Cottage Veg is the result of the author’s evangelical mission to change your life. “Changing your prime culinary focus from meat to veg will require a shift in attitude – but not, I would argue, a very big or difficult one. It’s true that if you eschew meat and fish, you have to look at other ingredients with fresh eyes. You have to take a new, more creative approach to them. But once you become accustomed to cooking vegetables as main meals it will soon seem like the most natural thing.”
One third of the recipes are vegan and are marked as such. Many of the rest could be revised to be vegan with a few substitutions, mainly for butter and eggs.
Photographer Simon Wheeler has worked with the author on several River Cottage books. Every recipe has a picture of the finished dish, or at least one variation of it, as Fearnley-Whittingstall offers different takes on many of the recipes.
Ideas for vegetable dishes have been borrowed from all over the globe. There are curries from South Asia where much of the food has always been vegetarian. The chilies stuffed with beans are Latin-inspired with cilantro, cumin and hot smoked paprika bringing out the best of the beans. The middle-eastern flavoured tahini dressing is the star of the zucchini and green bean salad and would make an excellent dressing for many vegetables.
River Cottage Veg is more than just a cookbook. It is a passionate statement about the state of the modern food system and its pitfalls. It is a challenge to all of us to make conscious choices about what we consume and what those choices mean to the world around us. And as luck would have it, more veg on our plates is delicious and good for us too.
River Cottage Veg: 200 Inspired Vegetable Recipes by Hugh Fearnley-Whittingstall (Appetite by Random House, May 2013, $29.95) 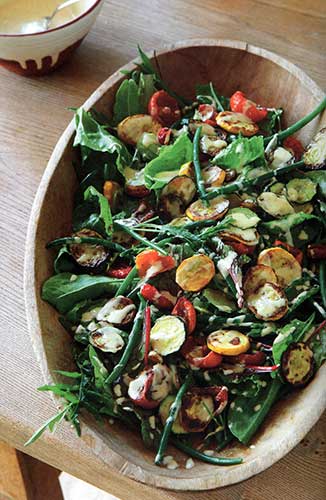 For the tahini dressing:

To make the tahini dressing, put the crushed garlic into a small bowl with the tahini, lemon zest and juice, orange juice, honey, and a grind of black pepper, and stir together well. The dressing may thicken and go grainy or pasty, but don’t worry. Just thin it down by whisking in a little water, 1 tablespoon at a time, until you get a creamy, trickling consistency. Finally, gently stir in the olive oil. Taste and add a little more salt and pepper if needed. The dressing is now ready to use.

For the salad, heat the olive oil in a large nonstick frying pan over fairly high heat and cook the zucchini slices in batches, tossing them occasionally, for a few minutes until tender and browned on both sides, transferring them to a bowl once cooked.

When all the zucchini are cooked, season generously with salt and pepper, add the lemon juice and chili, and toss together well.

Bring a saucepan of salted water to a boil. Tip in the green beans, return to a boil, and blanch for 1 minute. Drain, and then dunk in cold water to refresh. Drain again, pat dry with a clean kitchen towel, and toss the beans with the zucchini.

To assemble the salad, spread the salad greens in a large, shallow serving bowl and scatter over the dressed zucchini and beans, tomatoes and shredded mint, if using. Trickle the tahini dressing generously over the whole lot and serve.

ED note: Oven-dried tomatoes are a cinch and can be used in so many dishes. Preheat the oven to 450ºF/230ºC. Slice as many tomatoes as you like in half lengthwise, from core to tip. Toss with salt and pepper to taste and enough olive oil to coat. Lay cut side up on a baking sheet. Bake until beginning to caramelize, 20-35 minutes, depending on the size of tomato used. Serve warm or refrigerate for later use. 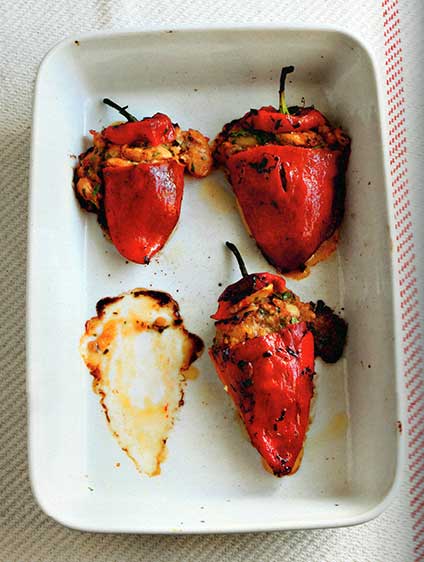 Author’s note: I like to use fat, mildly piquant, poblano chiles or piquillo peppers for this dish. But if you can’t get hold of stuffable large chiles, you can use small red or yellow bell peppers instead.

2 or 3 shallots or 1 medium onion, chopped

A bunch of cilantro, chopped

For the garlicky yogurt (optional)

Preheat the broiler to high. Lay the chiles on a baking sheet and broil, turning from time to time, until the skins begin to char. Leave until cool enough to handle, then carefully peel away the skins, taking care to keep the chiles whole. Cut around and remove the stalks and a flap of flesh to form a “lid”. Carefully scrape out all the seeds and membranes from inside the chiles and lids, and tip out any juice.

Preheat the oven to 350ºF/180ºC. Heat the oil in a frying pan over medium-low heat, then gently sauté the shallots and garlic until soft, about 10 minutes. Slice the tomatoes in half and grate their flesh straight into the pan, holding back the skin. Simmer for a minute or two to reduce slightly. Remove from the heat.

Add the drained beans to the pan and coarsely mash some of them with a fork so they break up a little – don’t over do it, you want plenty of them to stay whole. Add the chopped cilantro, cumin, and paprika, mix well, and season with salt and pepper to taste. Carefully stuff the mixture into the chilies and top with the lids. Lay the stuffed chiles in a lightly oiled ovenproof dish and bake for 20 minutes.

While the chiles are in the oven, combine the yogurt with the crushed garlic and some salt and pepper, if serving, and set aside.

Serve the stuffed chiles hot, with a spoonful of garlicky yogurt if you like, and a crisp, green salad.

ED note: Don’t worry if not all your lids survive the scraping out process. The bean filling toasts up nicely where exposed. 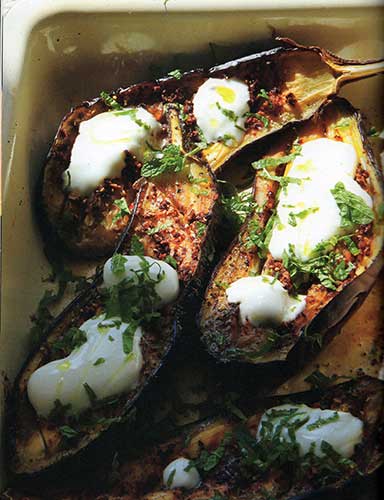 Author’s note: This is a really simple but delicious way to cook eggplants. Usually I serve them with fresh mint and yogurt, but I’ve also tried smearing them with a little homemade pesto, which is lovely. To make a meal of them, serve alongside a simple couscous salad, or just a green salad and some hot flatbreads.

Preheat the oven to 375ºF/190ºC. Cut the eggplants in half lengthwise. Using a small, sharp knife, make a series of deep slashes diagonally across the flesh, going about two-thirds of the way into the flesh, but not right through to the skin. You want to end up with 6 to 10 slashes, ½ inch/1 to 2cm apart in each, depending on the size of your eggplants.

Put the eggplant halves, flesh side up, in a roasting pan. Sprinkle with salt and pepper, then trickle over a little more olive oil – there should be little or no unoiled flesh showing on each eggplant half. Roast for about 50 minutes, or until deep golden brown and completely tender.

Leave the eggplants to cool slightly. Serve them hot or warm, either dabbed with yogurt and sprinkled with mint and a touch more salt, or smeared with a little pesto.

JENNIFER GAGEL is a freelance writer and can be reached at jennagagel@gmail.com.

JENNIFER GAGEL is a culinary enthusiast and multi-faceted freelance writer who can be reached at jenna@gmail.com