How can a small city cope with the presence of not one or two, but three, specialty chocolate shops? It is a burden the locals seem willing to embrace. In fact, one of the faux marketing jokes around Stratford is, “Come for the plays, stay for the chocolate.” 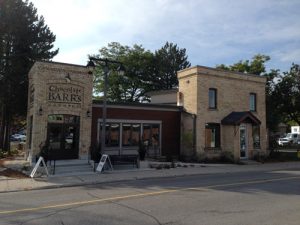 All the more reason, now that Chocolate Barr’s Candies is settled into their new downtown location. Last winter, Derek and Jacqueline Barr bought the downtown heritage building dating from 1889, originally the residence of a railway engineer. Renovations began on the former Sun Room Restaurant in February and they re-opened in July. “It was a six-year search [for a building] and a six-month renovation,” says Derek, “And we wondered if we’d hit our July opening deadline, but we’re here and loving it now.”

Moving from their decade-long residency on Stratford’s busy Ontario Street raised a few eyebrows in town. “We had a great landlord, great foot traffic and good visibility,” says Jacqueline. “But dark tinted and curtained windows on the sunny side of Ontario St. wasn’t great for displaying perishable food items,” she says with a smile.

“By buying and building, we could design and renovate for the store layout and displays we wanted, with more of an open kitchen concept so people can see the way we work. That, and accommodating a 35-foot cooling tunnel.”

Still, given how Stratford’s retail sector can be theatre-dependent, it’s forgivable to wonder about the timing. Hoisting a small vat of molten caramel with his “lead systems and production guy,” Matt Gardner, Derek says, “Actually, we are twice as busy already, and summer is our slower period because of all the chocolate holidays [that fall outside summer]: Thanksgiving, Hallowe’en, Christmas, New Year’s Eve, St. Valentine’s Day and Easter.” 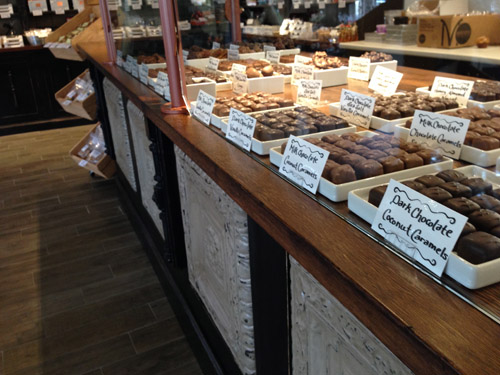 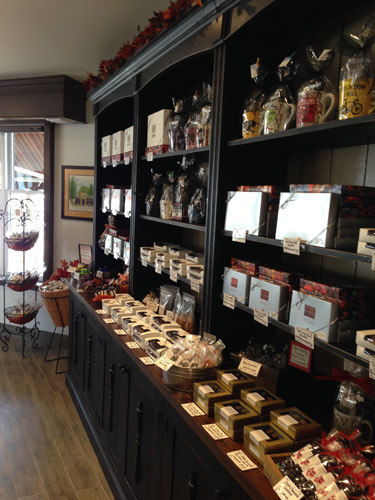 “We have 80 or 90 regular customers who come in throughout the year, and because we are in a direct sightline from the Avon Theatre and Studio Theatre now, we’re seeing an influx of new people.”

“Special events like Savour Stratford and the Stratford Chocolate Trail tourism program help too.” (And it probably doesn’t hurt customer traffic that they’re right across the street from Stratford’s downtown LCBO store.)

Derek was born and raised in Stratford, and Rheo Thompson, the doyen of mint chocolate, was a family friend. Derek worked for him through high school. “I was actually headed for a career in mining, but then Bre-X [mining company scandal] happened and Ontario industry hit hard times. So I came home and Rheo suggested I work at the shop again until I figured things out. And I was there from 1999 to 2003.”

In the meantime, he met Jacqueline. “So here was a great guy who made chocolate for a living … What was there to think about?”

But how does it work in a town of 30,000 to be one of three chocolate shops, within two blocks the venerable Rheo Thompson Candies and Rocky Mountain Chocolate Factory? “Stratford just loves its chocolate and we have a history with handmade chocolate that goes back to at least the 1950s,” says Derek, pointing to the century-old marble cooling table. “Having three specialty shops in town just makes the town even more of a destination. Our competition does a great job, and I think we make each other better.”

“Candy Makers, Chocolate Makers and Chocolatiers … I guess we do all of them, including small-batch items where we buy raw cacao beans, roast and grind them, and use it in specialty items. We have fresh Bean-to-Barr single origin chocolate from either Trinidad, Bolivia or Peru at any given time,” says Derek.

“Our cacao is fair trade and organic, and the sugar is organic, but we don’t major on those points,” adds Jacqueline. “Our focus is that our Bear-to-Barr chocolate is soy-free and while our facilities don’t allow us to label anything as such, we do make a range of dairy-free and sugar-free items available.”

Experimentation and innovation keep the candy game interesting for the Barrs. Jack’s Barr (nicknamed for Jacqueline) is among the most popular, made with 70% chocolate, toffee, salt and pepper. Or there’s the Espresso Barr made with espresso coffee … no chocolate, just powdered espresso beans, cream and sugar. 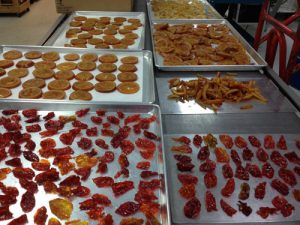 Anything goes! Assorted fruits and chili peppers are prepared for incorporating into chocolates

“We like to do random things to keep it fun,” says Derek. “Like when a farmer walks in with five pounds of dried chili peppers. What are you going to do?”

Barr’s has shipped chocolate as far as Japan, “but for a local martial arts group I did series of truffles using Japanese flavours, including wasabi, soy sauce, green tea, ginger and plum wine. They turned out great.”

So, any flops? Jacqueline rolls her eyes. “Yes! Lemon Zest & Thyme Butter Ganache. I told him it wouldn’t work.”

Derek just shrugs again, with his well-known mischievous smile, “If you’re going to do this seven days a week, you have to try these things.”

David Hicks is a Stratford writer and branding consultant who does not have a chocolate problem. Unless it’s all gone.

DAVID HICKS is a Stratford freelance writer and branding consultant.