In the world of shopping malls, it’s ideal to have anchor stores. Sure-fire steady tenants who bring a reliable number of clients to the centre for quality products.

Chef Erin Bonthron, owner of Heirloom Catering in London, has her own form of anchor stores. Every morning she rises early, along with her kitchen staff of two plus part-timers, to produce sandwiches, paninis and baked goods for uber-cool Locomotive Espresso coffee shop in London’s Old North neighbourhood. That’s one anchor. Each week Bonthron delivers over 500 of her hand made butter tarts, along with other “funeral food items” to her second anchor, Westview Funeral Chapel, a modern facility in west London with services that include receptions. In between those anchors are a wide range of typical catering clients and events, including corporate lunches, cocktail parties, fundraisers, weddings and receptions.

“I aim for a lot of flavour in one bite, different layers of flavours, using acids to cut through the richness,” explains Bonthron. A taste of her smoked brisket mini-tacos, using products from Metzger Meats, along with pickled radish, horseradish cream and daikon micro greens provides a stunning example of her skill. The hors d’oeuvre is filling, despite its miniature size, and satisfying. 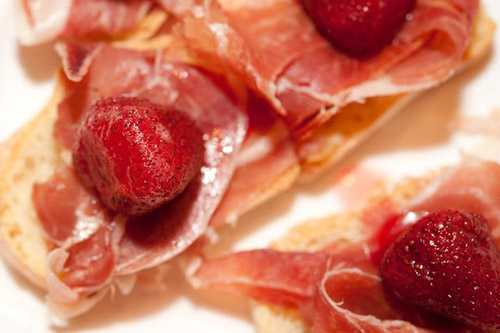 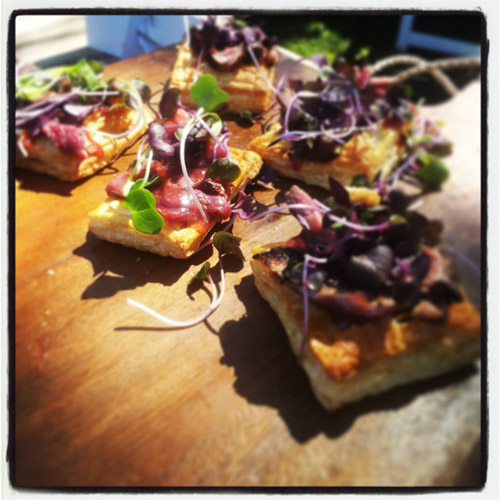 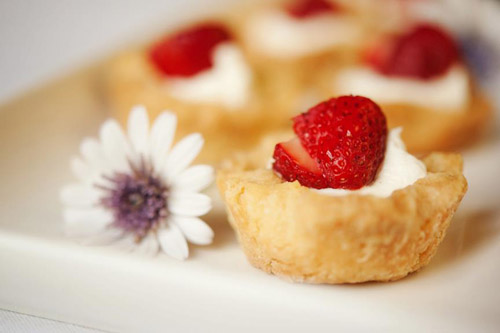 The same can be said of her pistachio pressed chicken skewer. Extremely tender and wonderful in its simplicity, Bonthron makes a classic come alive.

It’s fitting that she draws on a producer such as Gerhard Metzger for her proteins. Bonthron spent her youth in Huron County where her mother worked, for a time, as a chef at the long-running Red Pump Inn in Bayfield. Her family still owns cottage property near Grand Bend. She draws her inspiration from her mother and grandmother, keeper of the butter tart recipe.

“As a kid, I was always exposed to good food. The other kids had grilled cheese and I had stuffed pork tenderloin for lunch,” she laughs. “I’ve developed many recipes with heirloom in mind, with the memory of how my grandmother cooked.”

It’s kind of cute that Bonthron now makes grilled cheese sandwiches for her catering gigs. But these are not the grilled cheese of the 1970s. Bonthron adds house-made ketchup to Balderson cheese melted between sourdough bread, slathered in butter for extra crispiness.

Even though Bonthron grew up with culinary genes, she took an unusual route to the professional kitchen. After graduating from Western University in 2001 with a Bachelor of Administrative and Commercial Studies degree, with a major in Finance, Bonthron entered the world of accounting, working for ad agencies in Toronto.

“But I always loved to cook and entertain,” she says. So, putting the corporate world aside, Bonthron moved to Stratford to train at the Chefs School. She worked at Pazzo there, and also in Toronto, and traveled in Europe before opening Heirloom in Delaware, west of London, in May 2012. Her first client was Westview and she hasn’t looked back. Expanding to a larger industrial kitchen in south London, Bonthron now juggles her business with raising twin toddlers.

“I guess you could say I also juggle food,” she says with a smile. “From sandwiches to fancier hors d’ouevres, to a wedding that features Asian food, I enjoy the challenges.” And her loyal customers enjoy the outcome. 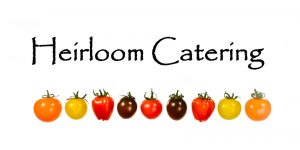 Jane Antoniak is a regular contributor to eatdrink. She is also Manager, Communications & Media Relations, at King’s University College, London.

Jane Antoniak is a longtime contributor to Eatdrink, sharing her passion for food, drink, travel and the arts through her writing, while always connecting with the people she meets along the way. She is also Manager, Communications & Media Relations, at King’s University College in London.