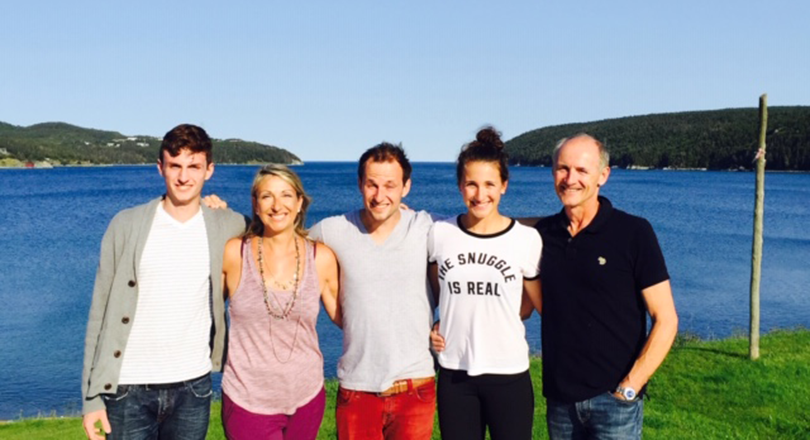 The secret inspiration for Donna Feore’s artistry on the stage, choreographing and directing dancers, singers and actors in brilliant, high-energy unison, comes from an unexpected place. The award-winning, Stratford-based dynamo behind the success of shows such as Guys and Dolls, Rocky Horror Picture Show, the movie Mean Girls and the TV movie Eloise, sees dance and movement all around her. In particular, she finds creative inspiration from her deep love of sport. This interview was conducted while she was driving to Toronto to proudly cheer on her daughter Anna Feore, a Team Canada volleyball player who is in her final season with the University of Toronto Blues. On another day she might have been spectating at her son Tom’s fencing match when he was also an undergraduate varsity athlete at U of T, or cheering her older stepson Jack at soccer. 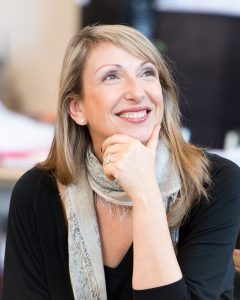 “I just don’t trust an actor that doesn’t love something other than acting. There are so many cross-overs and parallels between arts and sports. I commiserate with Anna’s coach all the time at U of T. We talk about strategies: we have to mediate, motivate and inspire. It’s very similar. One thing is for sure, when an athlete or actor loves something else, they bring more to the table,” says Feore.

The mother-daughter pair has a favourite hangout: courtside watching the Toronto Raptors of the National Basketball League. “What I love about basketball is that you’ve got these big lanky men, some over seven feet tall. Now you are on this tiny space and you watch how beautifully they move. They are so body aware of each other. It is a beautiful dance and they are pretty graceful. When I saw LeBron James — that got me excited,” says Feore. “I have been known to have a glass of wine or two and buy very expensive Raptors tickets. It is so invigorating — I love being there.”

What Feore experiences watching the round ball on the small court she transfers to the thrust stage at the Festival Theatre at Stratford, where she is kicking off her 25th season. She is a wizard at three-dimensional choreography, using every inch of a stage that has the audience wrapped around it on three sides. Right now, the excitement is mounting for this season’s production of Billy Elliot the Musical, which is in rehearsals at Stratford under the direction and choreography of Feore and which features a cast of 44, including 11 children. It is just one of seven productions she is working on in 2019, from Stratford to New York City to Ottawa.

“I’m kind of busy everywhere right now,” says Feore without a trace of fatigue. “Billy Elliot is really my prime focus right now. It’s the first out of the gate and the biggest prep. It’s a show that has 14 production numbers. It’s crazy. It is a huge show. We did a Billy Bootcamp in January and did a week with some of our young company including with Nolen Dubuc, the Billy Elliot, and his understudy. We have some exciting things like flying — so we had a week of doing scene, dialect work and then we started rehearsals on February first.”

Feore says it has taken a year of preparations for her famous reinvention of a popular musical to the thrust stage. “I only do those that I can reimagine,” she says. For her, working with an 11-year-old lead is exciting. “I learn a lot from young actors, watching how free they are. They don’t have that mileage on them. They are incredibly open.”

At the same time, Feore is also directing and choreographing the second Stratford musical of 2019, Little Shop of Horrors, at the Avon Theatre with a ’60s score and loads of special effects. “Our plant is off the charts crazy as only Stratford could do it,” she says. This is sure to be a hit with the same crowd that put Rocky Horror into the Stratford record books for longest run, and with huge financial success. Feore says one woman attended Rocky 42 times and several others saw it 30 times. She hopes it will now move to Toronto.

“The hard drive is full,” laughs Feore when asked how she juggles two major shows alongside work in other cities. “I tell my assistant ‘download all the content from my brain’! I work with my associates, they are fantastic and have been with me for six to seven years. We have our system. They get all the information and record everything. Right away, we set four to five numbers and if there is dance in a show we do that early, as it takes stamina so people are healthy, strong. There’s a bit of a method to the madness, you know.”

Her longtime friendship and collaboration with Stratford Artistic Director Antoni Cimolino is evident in his regard for her. “Donna is the master of musical theatre. We are so fortunate to have her return this season and take on the gargantuan task of helming two major productions at the same time. Her work last year on The Music Man and The Rocky Horror Show was inspirational and I have no doubt that her productions this season will have us all seeing both of these musicals in a brand new light.” 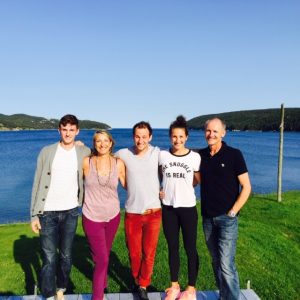 Fifty-five-year old Feore seems to thrive on the “madness”. She and her husband, acclaimed actor Colm Feore, are also parents to 22-year-old Anna and 24-year-old Tom, a law student at U of T, as well 29-year-old Jack, Colm’s son from a previous marriage, who is getting married this summer in Nova Scotia. Donna Feore is fiercely proud of the three of them. “The whole team knows when my kids are doing something! Sometimes the whole crew watches a semifinal match on the computer if Anna is competing abroad. It’s all about priorities. For women, I think we can have it all but not at the same time. Stop trying. This can go and that can happen. That can go and this can happen. I call it dabbling in wonderful.”

She credits their decision to make Stratford a home base since 1997 as key to being able to manage two show business careers while raising a family. Feore says the location gives them room to breathe and that they actually enjoy the drives from Toronto Pearson airport to Stratford while Colm commutes to film shoots and she to stage and film work around the world. And, with her trademark big personality, she jokes that her choice in a husband was quite practical. “The other smart thing I did was marry a man who is an absolutely fabulous cook! First question when you meet someone is: do you golf, the answer is no then you carry on. Second question is do you cook and the answer is yes then you carry on!”

Feore’s theatre work is vast and expanding. The hit The Hockey Sweater, the Musical that she directed and choreographed ran at the National Arts Centre in Ottawa, and is now being translated to French for the Montreal stage. She hopes that show will travel out west. She is developing a new musical in New York and another for Stratford, she hints, possibly for 2020. Her multi-media production, Life Reflected, will run on International Women’s Day in Ottawa, and she continues to work as a director with operas, including The Marriage of Figaro in Ottawa.

Despite all her career success, Feore says that in the end she has a small target audience: her family. “Honestly: every choice I make in my life, from choices of what material I am going to do, what I won’t do, I think of my daughter. I want my daughter to be proud of me. Sometimes we have to make hard ones, and we have to speak up and have hard things to say. The one thing I’ve always taught my children is that there is a very big difference between assertive and aggressive. Being assertive is about being clear and it will take you a long way. There is nothing gray about me. I take the word director seriously — it has the word direct in it and it’s never been so important. Do what you mean and mean what you say.”

Jane Antoniak is a longtime contributor to Eatdrink, sharing her passion for food, drink, travel and the arts through her writing, while always connecting with the people she meets along the way. She is also Manager, Communications & Media Relations, at King’s University College in London.