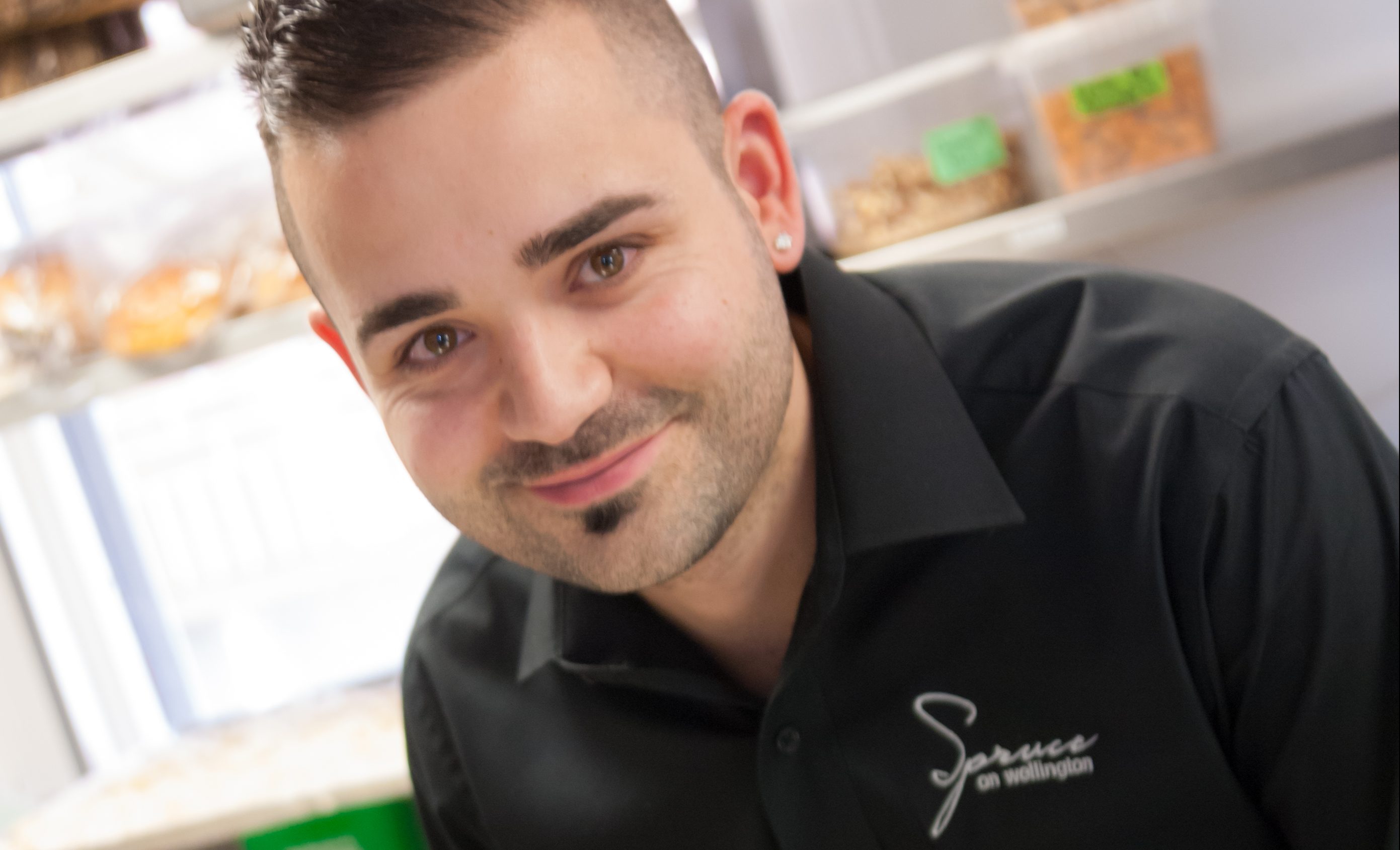 Spruce on Wellington opened in January 2017 in a small house. Its minimalist design has charm and is compact with 32 seats in the dining room and 22 on a nicely appointed seasonal patio. The premises were formerly those of Willie’s Café, a landmark catering company and lunch hot-spot for over three decades. (Incidentally, a new iteration, Willie’s Catering and Takeout recently opened at the London Food Incubator in Old East Village.) The intimacy of the operation allows executive chef/owner Thomas Waite and chef de cuisine Evan Futcher (formerly of The Springs and Black Trumpet) to not only prepare meals à la minute, but be hands-on in the dining room to converse with the diners. 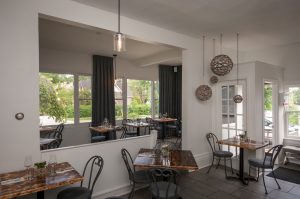 Located in a small bungalow with plenty of charm, Spruce on Wellington features a minimalist design.

There is a good-hearted bravado about Waite that is disarming. During a lengthy conversation we talked operational challenges, acoustics, social media and chef colleagues who share their talent and passion for the profession. Since he was able to talk, Waite wanted to be a chef and has worked towards that dream. As a child he transformed the family basement into a restaurant, naming it after hockey legend Mario Lemieux. Waite’s aim for the Spruce on Wellington to become a jewel in the city’s dining scene is an understandable ambition.

He was 15 when he began to adopt restaurant lingo and kitchen jargon, while working at Joe Kool’s. At the RiverBend Golf Community Waite worked for five years under the guidance of executive chef Kirk Weiss, whom he credits as an important mentor. After enrolling in the Culinary Skills and Culinary Management programs at Fanshawe College Waite received his Red Seal certification, which he refers to as “a high point in my life.”

Tucked into his résumé are the launches of four contrasting restaurant concepts. They include Earls London, Byron Freehouse, Icarus Restobar and Wich is Wich. Despite being hands-on in the opening process he never felt the sense of fulfilment he was seeking.

Before turning 30, Waite had eight surgical procedures which resulted in an ostomy. Having to mitigate and combat his health concerns while pursuing his career has been worrisome. Another surgery to reverse the procedure is slated for the near future. “This is all part of who I am and my personal story,” says Waite cheerfully, revealing a certain mettle when I ask whether disclosing this in print is an unreasonable intrusion and invasion of his privacy. Waite, by his own account, draws inspiration from molecular gastronomy proponent, Chef Grant Achatz of Alinea and Next in Chicago. Achatz famously surmounted his own well-publicized health issues.

In our conversation, Chef expresses gratitude for his parents, Greg and Evelyn, for having supported his career, and for being hands-on during the construction and now with day-to-day operations. In fact, his father crafted all the dining room tabletops out of spruce wood.

Waite started The In Home Chef catering business in 2010, as an outlet to express contemporary takes on cuisine. Delivering a professional restaurant experience directly, Waite is known for classic, seasonal food preparation, with a twist. Custom menus allow him to express his culinary point of view, and this freedom is the driving force to which he attributes his success as a caterer.

Last year The In Home Chef catered 160 events, and Waite is looking to surpass that record. In addition, Waite has taught cooking classes at Loblaws Superstores, as well as the Peppertree Spice Company in Port Stanley. Intimate, immersive cooking classes are also offered at The Spruce. There is a line of popular dressings and marinades retailed in-house and at Remark Fresh Markets. But first and foremost is the issue of how to run a successful catering operation and a demanding restaurant simultaneously, while balancing all of his culinary interests.

Chef is among a group of young entrepreneurs living their dream and driving the city’s expanding foodie circuit. He collaborates with chefs like Ashton Gillespie (profiled last year in an article on the now defunct Le-Rendezvous, he is now a chef specialist for Diply Delicious videos) who he hires for special catering events. 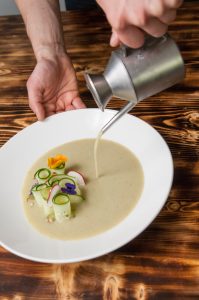 Waite takes his sleeve of tattoos as seriously as he takes his knives. His culinary fervour is expressed with intricate, multi-coloured graphics on his forearm, which also sports the moniker, Chef. The other arm features a series of overlapping roses and the quote, “Live long and prosper” — which he emphatically states is by no means a tribute to Star Trek, but a homage to his grandfather. His mother’s middle name is Rose.

Waite’s creativity is strong. I recall the standout “Little Tommy’s Meat Loaf,” when he was sous chef at Byron Freehouse. Comprised of pork infused with Asian aromatics and caramelized onions, it was finished with a ponzu-like citrus soy glaze. Another strong memory is of his layered butternut squash parfait with whipped yogurt, honey, granola, quinoa, spiced nuts and dried apricots when he was chef at Icarus Restobar. A blast of flavour with the crunch and texture of spiced nuts combined with the sweetness of honey against the yogurt and dried apricots. It was pure alchemy. 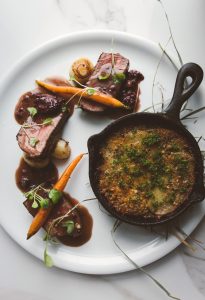 Artfully arranged beef tartare, pork belly and charcuterie are on trend and as appetizers here at the Spruce they generate good word of mouth. Picture a plate of impeccably house-cured and smoked Manitoulin Trout with toasted rye bread, green goddess dressing, sprouts, marinated cucumber, shallot pearls and grated horseradish that has become a house signature. An earthy coq au vin is made with succulent breast and thighs, cabernet sauvignon, pearl onions, wild boar bacon, mushrooms and cream. At lunch perfectly al dente fettuccine carbonara with Parmigiano and boar bacon crowned with a raw egg that is essentially cooked by tossing the hot pasta is a hit. There is also a good Bolognese and delicious potato gnocchi. Brunch is served on Saturdays and Sundays. 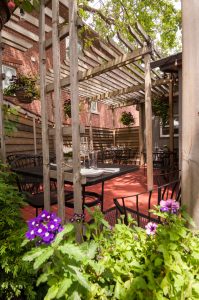 The wine list, while not terribly extensive, is reasonable and has good selections with some VQA. There is a short but interesting cocktail list.

Waite is a chef for whom work is everything — his consuming passion is for cooking and jobs he can really sink his teeth in. His cuisine is beautifully handcrafted, classic in its influences, innovative in sensibility and plating. Known for combining flavours and textures in outstanding ways, he talks about incorporating foams, powders and dry ice on future menus. “But nothing too crazy,” says Waite with a smile.