With a diversity of annual festivals and events year-round, Kingston is known to celebrate its renowned culinary culture. In downtown Kingston history comes alive in the architecture and distinguished limestone buildings that have been preserved and enhanced and now house numerous stylish cafes and unique restaurants. The downtown has over 100 restaurants in a nine block area. In fact, I have been told there are more restaurants per capita than anywhere else in Canada. 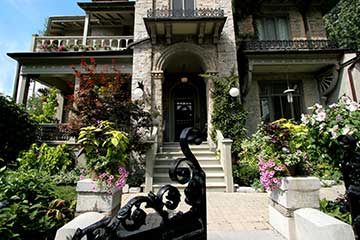 A get-away to Kingston is made all the more appealing and relaxing when you stay at innkeeper Holly Doughty’s welcoming Rosemount Inn and Spa, an 1850’s Tuscan-style villa located in the heart of downtown. The Rosemount is the personification of hospitality and comfort. Flare magazine once referred to the Rosemount Inn as the “best B&B experience in Canada.” The inn’s eleven rooms and chalet-style coach house, all with ensuite baths and comfortable beds, are well-appointed with period antiques, decorative castings and arched, leaded windows; the paths and driveway are paved in tumbled stone, and a restored ornate cast iron fence on limestone base frames the villa and gardens.

A gourmet breakfast at Rosemount Inn might comprise a selection of fresh fruit, salad and fluffy omelette, or seasonally-inspired quiche. The signature house speciality of Welsh toast with fresh berries, warmed local maple syrup and crème fraîche will help fortify you while discovering the nearby 1000 Islands and Kingston’s many cultural venues. Doughty and her attentive team also serve an afternoon tea in the dazzling front parlour.

In the summer, Kingston by Fork offers two culinary walking tours, or they will customize one for twelve participants or more. On Tuesdays, Thursdays and Saturdays, to coincide with the days that the Market Square open-air market is open, (established in 1801, it is the oldest continuous market in Canada) it guides guests on a tour of the market and a few other local venues, culminating in a three-course lunch at Aquaterra Restaubistro. This is called the Homegrown Eats Tour. The other tour on offer is An Edible Escapade; participants enjoy a tasting tour of seven downtown establishments and learn about their commitment to sourcing local ingredients.

What draws us to Le Chien Noir (besides a glowing recommendation from Holly Doughty) is its idiosyncratic take on farm-to-table cuisine, as well as a sturdy list of VQA wines, many from nearby Prince Edward County. Located steps from Kingston’s historic Market Square and just a

few blocks from the waterfront, the restaurant is located on the Brock Street Common that has been an established commercial area since the 1820’s. Le Chien Noir is situated in a stylishly refurbished and renovated Victorian site. A diverse clientele frequents this vibrant, engaging and comfortable restaurant with faux tin ceiling, retro art deco lighting fixtures, exposed brick walls, wood surfaces and mirrored accents. A focal point is the long and spacious zinc bar at the entrance, with large crystal chandeliers.

Le Chien’s chef, Derek MacGregor, has a reputation for referencing both the local -terroir and the quintessence of French county fare for inspiration. MacGregor is a proponent of King-ston’s Local Food–Local Chefs’ initiative, which raises awareness of regional ingredients, products, producers and farm-to-table chefs in the area.

Kingston is also home to the well-known Luke’s Gastronomy; Luke Hayes-Alexander started cooking at 11, asked for a suckling pig to butcher at 12, and at 15 he became the chef of his family’s restaurant and took the menu into unchartered and avant-garde terrain. Food writers began referring to Hayes-Alexander as a culinary wizard and virtuoso, mature beyond his years. Luke’s Gastronomy, serving mostly miniscule but artistic creations, is sure to be an unconventional culinary experience. Visit this downtown restaurant with an open-mind and ignore the decor. Reservations are absolutely necessary. 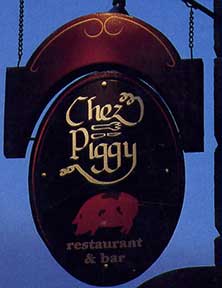 Over three decades ago, Rose Richardson and the late Zal Yanovsky (formerly of the rock band, “The Lovin’ Spoonful”) restored an abandoned limestone livery stable, tucked away behind old brick buildings off a quaint courtyard, and launched the iconic Chez Piggy, a dining experience that helped make Kingston a culinary destination. “The Pig,” as it is known locally, plus its nearby bakery, Pan Chancho, with its hospitable staff attracts an enduring, faithful clientele.

No visit to downtown Kingston would be complete without a visit to Cooke’s, a local culinary landmark. Cooke’s is a gourmet food specialty shop and coffee roastery, founded in 1865, it retains its old world ambience with original wooden counters and pressed metal ceiling.